by Nat S.
It has been 70 years since the signing of Executive Order 9066 which led to the mass roundup, removal, and incarceration without due process of over 110,000 Japanese Americans.    This period in U.S. history is a stunning reminder of the fragility of our civil rights.

On 16.June.2012, the Northwest Nikkei Museum, which is at the recently renovated Japanese Cultural and Community Center of Washington (JCCCW), officially opened a new exhibit, Art Behind Barbed Wire:  A Pacific Northwest Exploration of Japanese American Arts and Crafts Created in World War II Incarceration Camps.

Please see JCCCW for more information about this exhibit and the cultural center itself as a valuable local resource.  Hours are Monday through Friday, from 10am to 4pm, and by appointment on Saturdays.  Guided tours for individuals or groups will also be available upon request.

The JCCCW, which is comprised of three structures, is an historical site itself, having served as transitional housing for Japanese-American families returning home from their incarcerations after WWII.

Whether or not you’ve already visited the Bainbridge Island Historical Museum or the Japanese American Exclusion Memorial on Bainbridge Island, a visit to the JCCCW and its current exhibit is highly recommended.

Some works were done by trained artists, such as Masao Mike Kawaguchi.  Mr. Kawaguchi worked for Disney before and after the war, and for Hanna Barbera.   During WWII he served in the 442nd Regimental Combat Team in Italy, France and Germany; and for military intelligence in Guam and Iwo Jima.   He painted scenes of everyday life in the incarceration camps when he was on furlough to visit his family imprisoned at Minidoka, Idaho and Heart Mountain, Wyoming.   What irony.
All items in the exhibit attest to an astonishing strength, creativity and perseverance of Japanese Americans forced from their homes, land and livelihoods to live under adverse conditions in incarceration camps.

On a personal note:  my husband’s grandfather, who’d been a resident of Hawaii, was imprisoned at incarceration camps run by the Department of Justice on the U.S. mainland.   One of the pins carved by Grandfather in the camp is included in the exhibit.   Grandfather’s only son served in the 442nd during WWII.
Posted by aleks at 1:06 PM No comments:

This flyer came with email from Rachel, who is the events coordinator at SJG - everyone is invited to attend in support of the Garden:

Come to a summer evening party in the Japanese Garden and enjoy taiko drums, shakuhachi flute, wandering geisha, sushi and salmon, wines and sake. This year’s party includes an opportunity to bid on round-trip business tickets to Tokyo, sculpture by Gerard Tsutakawa, original Mariners package, an evening at Nishino’s, and more.

See below for details and purchase tickets at http://www.brownpapertickets.com/event/237843 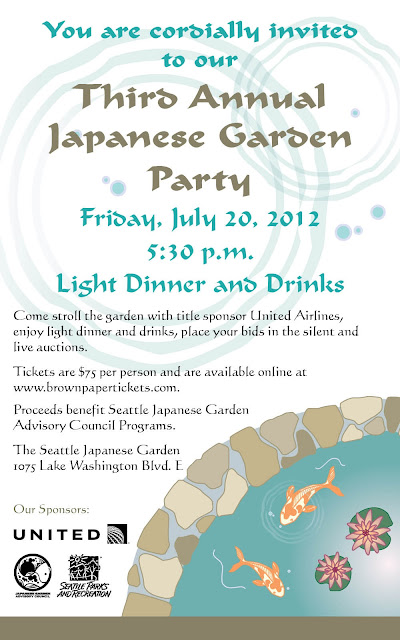 aleks:  Children's day is a national holiday in Japan, celebrated on May 5th each year. How the Japanese children celebrate the day? In SJG they get to learn origami, zen gardening, play-dressing up in kimonos and yukatas, watch Japanese puppetry and taiko drummers -  all 'educational' fun. Is it the same in Japan or different? Do children play games we should learn about and maybe teach here, too?

Keiko: In modern day Japan, the parents are expected to take children out to places, such as Tokyo Disneyland, local zoo or a park to have fun together. In many cases, fathers are often very busy for their long working hours and long commute. This day is a good reminder that children need to have fun with their parents.

a: How about food? Is there a type of food associated with Children's Day?  Here it would probably be ice cream. Are there some treats that Japanese children especially love and expect that day?

There seem to be different kinds of chimaki all over Asia. But chimaki for me is Japanese glutinous rice cooked in wrappings of bamboo shoots skin (or bamboo leaves.) I have read that its origin is portable food for soldiers over a thousand years ago. Chimaki could have been eaten for days (weeks?) after it had been prepared. I think the story is believable because the chimaki is traditionally cooked in lye (yes, you've read it right), which is caustic solution made by leaching wood ash (aku= 灰汁) capable of killing bacteria.

In Kagoshima prefecture from where my parents are, chimaki is called akumaki. (Maki means roll.) I think akumaki is close to its original form because of Kagoshima's long distance from central area of Japan; Kagoshima preserved many kinds of old fashioned food and customs. Once a year, our relatives in Kagoshima sent us a package of akumaki wrapped in bamboo shoots skin. The glutinous rice had a unique flavor from aku but had no other ingredient. It was not even sweet on its own. While it could be eaten cold, my mother sometimes steamed them and we ate the cut sticky pieces with soybean flour (kinako 黄粉) mixed with sugar. It was a treat.

Speaking of chimaki, here is an old Japanese children's song, "Seikurabe = Comparing Height," in which a child thinking of his big brother marking his height on the pillar while eating chimaki:

"The mark on the pillar was from two years ago.
My big brother marked it for me while eating chimaki on May 5th.
Yesterday, I compare my current height with the mark
and found out that I grew only by the length of haori strings."

I had no idea what "the length of haori (Japanese style jacket) strings" meant since haori was not my everyday attire. The song is from the1920s when Japanese style clothing was still common in everyday life. (For your information, the length of haori strings is 10 cm or so = 3.5 inches.) The second verse describes the hills and mountains comparing their heights and concludes at the end that Mt. Fuji is number one even without its cap of snow.

Every time we had chimaki, my mother sang this song thinking of her own big brother who had passed away young. Up until 1990's, all the Japanese children learned this song at elementary school. I bet all of your fellow guides from Japan know this song!

Kashiwamochi is a rice cake with sweet red bean paste wrapped in oak leaf. At this time of the year, you can purchase this special treat at your local Japanese grocery store (Hint: starting with U) in Seattle and Bellevue or from your local Japanese sweets makers.

a: Are they any Japanese words associated with the celebrations you can think of that we could learn?

a: I read on Kids Web Japan about children's kyogen recital in Yokohama one year - is children's theater common as Kodomo no hi entertainment and have you seen any such performances?

K: Wow. I have never heard of children's kyogen. It must have been very unique experiment. The ideas of children’s theaters are novel in Japan.

a: Can you share your memories of Kodomo no hi?

K: The Children's Day has been always a part of "the Golden Week" when many of us can relax and do what we want to do instead of going to school or work.

a: So, there is no school on Kodomo no hi? Or does Kodomo no hi simply falls on the Golden Week? I googled GW and am no wiser - seems to me that it is a string of holidays commonly used for family vacation - or that is how I understand this wiki entry. Can you enlighten us?

K: You are right. GW is a string of holidays for family vacation. It is a big deal for Japanese families since it is not so easy to take vacation from work for many Japanese workers. Depending on how you and your company manage your work days, it can be a vacation of whole week or more.

Also, the Japanese school year begins in April and many of us are under a lot of stress by the end of the month. Adjusting in the new environment is a lot of work. I think that GW is a nice break from it.

a: In most places I lived the end of April and beginning of May would be simply too cold to go for vacation, people wait for warmth of July and August; is Japan different that way?  Is the weather good at that time?

K: Beginning of May is a beautiful season. It is before the infamous rainy season starts. I believe that for most people in Japan, May is associated with flesh greens and flowers everywhere.

Happy KODOMO NO HI to all who managed to remain KIDS
in their hearts from Keiko and aleks : )

! Reminder for docents: Continuing Education Meeting next Thursday, June 14th at 10:00. The speaker will be Carolyn Staley of Carolyn Staley Prints, and her subject will be "Japanese Seasons and Gardens in Antique Prints and Books."
Posted by aleks at 2:48 PM 3 comments: