Senior Priest, Rev. Lawrence Koichi Barrish performed Oharae at midnight on December 31, and multiple times during the following days of January 1 and 2, 2013. In this period, over 1000 people visited the shrine.

To plan your own visit, check www.tsubakishrine.org  for information on activities and events.

A Visit to Longwood Gardens

by Lynnda
This fall, while on a trip to reacquaint with long-lost friends, I had the opportunity to visit a section of Longwood Gardens in Kennett Square, PA, in the outskirts of Philadelphia.
The garden was originally begun in the early 1700s by a Quaker family who purchased the land from William Penn.  In 1906, the farm was purchased by Pierre du Pont to preserve the arboretum begun by Joshua and Samuel Peirce over 100 years earlier.  Read more about this incredible park here:   The Story of Longwood Gardens

The gardens are immense, and since I had limited time to visit, I chose to focus on the Outdoor Waterlily Display.  Currently there are 5 shallow pools that grow water lilies from around the world.  The lotus plant really interested me, there are none in the Seattle Japanese Garden, but so many of the stone lanterns have a lotus blossom on the top.  I was intrigued to see a real lotus plant.  Although it wasn't blooming during my visit, several of the seed pods were visible.  I had seen them in floral arrangements and didn't know what they were. They are the brown pods sticking above the blue-green leaves in the photo below.  The plant lives in murky pond water, but the flower is pure and beautiful.


The lotus flower can range in color from pure white to lavender, pale blue or pink  In the picture below, you can see the seed pod as part of the blossom. From religionfacts.com, "The roots of a lotus are in the mud, the stem grows up through the water, and the heavily scented flower lies pristinely above the water, basking in the sunlight. This pattern of growth signifies the progress of the soul from the primeval mud of materialism, through the waters of experience, and into the bright sunshine of enlightenment."

The giant water-platters, pictured below, were first hybridized at Longwood Gardens.  The winter weather in Philadelphia  is too harsh for the plants to survive, so in February each year, new plants are started from seeds collected the previous summer.  By mid summer, they have grown to over 6 feet wide and can hold up to 100 pounds if the weight is evenly distributed on the platter.  They are incredible to see and remind me of many children's storybook illustrations about frogs and pond life.  I would love to have seen a small child lounging on one of the platters! 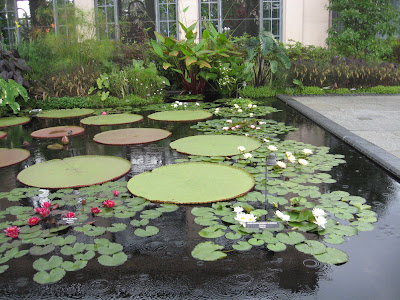 The sign below explains the growth of the Water-Platter plants.  One plant will produce many leaves, and they grow to maximum size in 4 to 5 weeks. The flowers are spectacular, have a very short life and bloom at night.  The first night they are creamy white with a strong pineapple fragrance.  The flower is 10-12 inches across and resembles a large magnolia flower.  This is a female flower, and it closes up during the day.  The second night, it is a pinkish color and is now a male flower.  That's as long as the flower lives.  What a wonderful opportunity to have seen these magnificent plants in bloom!

Walking to the Water Lily Display required walking through a Bonsai display.  The Crepe Mertle was in full bloom and was so beautiful.  I don't recall seeing these plants in the Pacific Northwest, but the countryside in Maryland had many in bloom, and they were a joy to see.

When leaving Longwood Gardens, we walked through the Children's garden, and this dragon was guarding the entrance.  This park has something for everyone, and should you find yourself anywhere in the Philadelphia area, be sure to take the time to visit.  It will not disappoint. 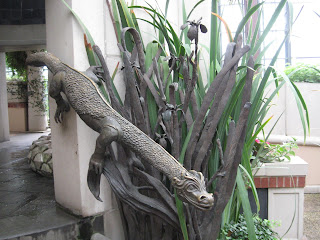 by aleks
Last Friday, sunny but really cold for Seattle standards, and the day before she flew back to her sub-tropical home in Australia, Marilyn and I decided to visit Seattle Japanese Garden, officially closed for winter, just to see how it looks like at this time of the year.  Patty the gardener kindly let us in through the back-gate and below is what we saw as we trekked around, carefully avoiding ice-covered bridges and stepping stones:  lot of frost and sleets of ice on the pond...


Many camellias have buds, and will be flowering soon!  It's quite a sight to see them so defiant in this weather, especially knowing that soon they'll put up a magnificent show - last year i captured quite a few of them in the act: you can go to the Bloom Blog, click on listed camellias and start salivating....  Before we left we decided to check on the most lionhearted of the camellias, usually blooming before the gates of the Garden open- we were not disappointed to find many bright pink buds and a lonely brave flower already:


Btw, Marilyn hopes to become a guide in the Garden, as she spends considerable amount of time in Seattle; we met last summer, at her previous visit to our town - she was just leaving the Garden and decided to stop by and join SJG guides' group gathered to watch 'Japan: Memoirs of a Secret Empire' - a part of the 2004 PBS documentary series in our last year's Japanese Films in Tateuchi Room pilot project.

at my gate
a flawless little patch...
morning frost


Translated by David Lanoue
Posted by aleks at 12:47 PM 1 comment:

My father in law was sitting in the armchair, his hands busy conducting a Gilbert and Sullivan’s opera streaming from the CD player when we entered his room in Nursing and Residential Home in Malvern.   He is nearly 90 years old now and it was his good day for the outside world to visit: he smiled while his palm went up in the air along with musical crescendo, then down when the intensity of a passage trailed off:  ‘welcome’ he said, smoothly transitioning from his enjoying the music to focusing his attention on us.


Dave is in a good health, but his memory is not so great anymore, so he often asks where he is, and oh yes, he remembers Malvern, he went to school in Malvern as a small boy and on this particular day he even remembered to tell us that on Sundays the schoolboys climbed and hiked the nearby Malvern Hills, which we could see through the facility’s windows… With an exception of flying Spitfires around Africa during the end of World War 2, Dave spent most of his life around this part of England, so it’s fairly easy for him to orient himself in this space now, even if not so easy in time.


I don’t know if Dave still remembers how lovely the whole town of Malvern is for he no longer ventures out, or whether he has any recollection of Malvern Winter Gardens, which we visited one day on the way to the nursing home – the name is actually a commercial venue of a still active music scene, which was especially noted during 60s, 70s and 80s for hosting Jethro Tull, Procol Harum, AC/DC and the likes, but it is located in actual beautiful gardens surrounding built in 11th century Great Malvern Priory, originally a Benedictine monastery constructed for thirty monks on land belonging to Westminster Abbey.

I’m pretty sure Dave must have attended some services there in the past, admire the building’s architecture and its stained glass windows, as well as have strolled the gardens in all seasons of the year.  This January the gardens were truly wintery and somewhat serious in the crisp air and under the cloudy skies, showing their own well weathered architecture and bone structure that gives support to gaiety of flowers and leaves of the three remaining seasons. There is something about gardens in winter that I find particularly attractive, especially old, established gardens that only then show their spirit and soul without distraction of ornaments, and Malvern Winter Gardens were quite magical this way.


When we were saying our goodbyes to Dave he smiled and whispered in my ear that he often doesn’t remember who the hordes of people visiting him and claiming being his family are (that included us, I’m quite sure), but he is grateful nevertheless.   He smiled broadly waving us goodbye and promptly returned to conducting his opera after we cranked the music up again, before leaving: his both hands went up and his words aligned with a joyous end of the musical phrase: ‘well done!’.


My sister in law shared a book  ‘The Garden of Evening Mist’ by Tan Twan Eng with me on this trip: it’s a fiction work taking place in a Japanese garden in Malaya, a topic fascinating in itself, but especially that the book has long delightful passages of ‘un-plot’, dedicated to principles of the Japanese gardens, different kinds of shakkei,  types of woodblock prints, multiple  references to written nearly 1000 years ago ‘Sakuteiki’ (which caused me to re-read it in parallel fashion) and Japanese culture in general (from many points of view, as the Japanese are Malaya's occupiers in this narrative).

But the book is also a sort of meditation on passage of life, with lines as satisfying as this one:
[…] ‘Aritomo once recited a poem to me, about a stream that had dried up.’  I think for a moment then say, ‘Though the water has stopped flowing, we still hear the whisper of its name.’ […]


• • • • •
Reminder: the first 2013 viewing of Seattle Japanese Garden is scheduled for March 3rd (Sunday) – check Seattle Parks Department website (in LINKS) for time and celebration activities.
___
門前の小僧習わぬ経を読む。 (Mon zen no kozō narawanu kyō wo yomu) Literally: An apprentice near a temple will recite the scriptures untaught. Meaning: The environment makes our characters.