by Lynnda
I had a 12:30 public tour to lead today, and I thought I had left home in plenty of time to accommodate all the traffic snafus predicted for the day.  Fortunately, I had the gatehouse phone number saved in my cell phone and had to call twice to say I was stuck in traffic, but really, I was coming!  For the length of time sitting in traffic, fretting about being late,and the number of rain squalls that came and went while waiting to cross the , I was only 5 minutes late!  The Shedding Stone was in sight!  Tranquility will reign!
Two couples were just entering the garden and I enticed them to take my tour.  The weather was on a rapid change schedule.  It was cloudy and threatening rain, minutes later the sun was shining and no clouds were visible!  Then there was a downpour but we were in the azumaya and enjoyed the sights and sounds from there.
On the eastern path leading to the gardener's shed stands a Doug Fir that always intrigues me.  Horizontal holes are drilled throughout the trunk.  I had to ask my birder friend to identify who made these holes.  Her comment:  "A kind of woodpecker called a sapsucker makes those holes. They return over and over again for the sap and the bugs attracted to the holes! Other birds including hummingbirds also drink the sap!"  There are 3 uncommon species in our area and one common species, Red-breasted Sapsucker, according to The Sibley Field Guide to Birds of Western North America.
As we walked around the garden, we were met with showers, torrents, sun shine and blue skies.  All within one hour!  There were ducks fighting with each other and with the koi, each trying to be the first to the fish food.  I was heartened to see some small koi still darting out from under the lilly pads.  Earlier this summer, I noticed their mouths weren't large enough for the small pellets of food.  They are now large enough to scoop up the food, but there are many fewer than a month ago.  Missing were sightings of all the turtles.  They must not have enjoyed the changing weather conditions!
What a surprise to see a brightly colored bloom on the Saucer Magnolia (Magnolia x soulangeana) near the eastern wall.  Are the seasons confused?
There were signs that fall is approaching.  The Burning Bush or Winged Spindle Tree (Euonomus alata) is beginning to turn colors.  In a few more weeks, in time for the Maple Viewing Event (Oct. 16, 2011), the leaves should be a rich, dark red color.  Also beginning to change color are the leaves of the Korean Dogwood (Cornus kousa 'Chinensis').  The Ginko leaves are still green, so I'll have to come back in a few weeks to see their radiant golden color.
Visitors to the Garden from now to the close in November will see an evolving picture of autumn colors.  Each week will showcase added colors.  Be sure to come visit often.  Some of my most peaceful visits have been in the fall when there's light misting.  Come and see for yourself!
Posted by Lynnda at 7:30 PM 4 comments:

Pics from Respect for Elders Day

by aleks
It was a beautiful, sunny and warm day - not as many people as it happens sometimes, with seniors arriving by busloads,  but enough.   It's one of my favorite events in the Garden, as the pace of the tour that day is usually a bit slower and relaxed, as it should be in this beautiful place, and also because many visitors are usually local and not tourists, so there is a feeling of truly sharing the place that we all visited  frequently before...

As you can see below, the leaves are beginning to turn, they will be quite ready for Maple Viewing Day on October 16th.

I have not posted to bloom blog the few flowers that I caught  blooming July and August yet (something to do on the long rainy nights soon), and here we are in September... Rose of Sharon is blooming right now...

Pics from PEACE THROUGH ART - marriage of Polish poetry and Japanese butoh dance...

by aleks,
most info stolen, together with words, from Mary's email - thanks, Mary!

All day free to seniors 65 years young and up.

Clouds may wander in but there is no threat of rain, and the temp looks to be holding in the low 70’s that day.

Several public tours (multiple-staffed):
12:30,
1:30,
2:30
& 3:30.
Most if not all of  Public Tours for senior adults will follow the ADA certified east pathway to the harbor/village area and back again, but full circuit tour (on request) available, too.

Or marriage of Polish poetry and Japanese butoh dance

by aleks
The Polish Salon of poetry in Seattle in cooperation with our own SJG guide and butoh artist Joan Laage (Kogut)  commemorates the start of WW2 in September 1939 in Poland. 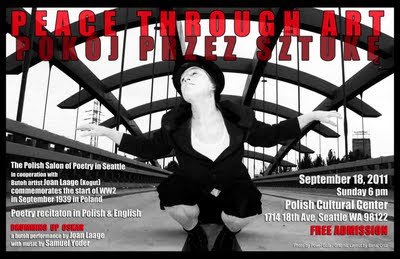 Drumming Up Oskar was inspired by “The Tin Drum”, the Nobel Prize-winning novel by German author Gunter Grass, who grew up in Gdansk, Poland between the wars.  The main character Oskar symbolizes the shrunken morals of a country perverted by fascism.  For Joan, many of the character, places, and events brought to life both her grandfather and great-grandfather, both of whom were Oskar and of German/Danish blood.  In this performance she digs into the past, connecting with her ancestral roots, and simultaneously, reacting to the present world climate.  The rise of militarism, irreversible environmental destruction, and signs of a resurgent fascism coupled with irrational religious fanaticism, suggest that humans are incapable of evolving into more compassionate and tolerant beings.  And yet, we must persevere and nurture seeds of hope.  Oskar has been performed in Krakow, Paris, and Ulm, Germany.
Posted by aleks at 9:50 PM No comments: