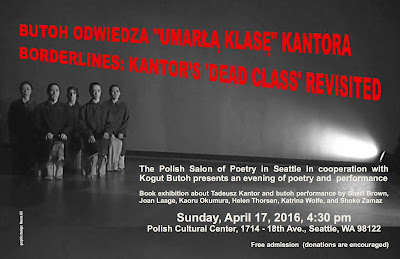 The Polish Salon of Poetry in Seattle and Kogut Butoh present evening of poetry and performance  Borderlines: Kantor's 'Dead Class' Revisited, directed by Joan Laage and staged with five other artists. 'The Dead Class' is a famous play by Tadeusz Kantor (1915-1990), Polish playwright and director renown for his ascetic performances. Joan 'Kogut' Laage is known in Seattle for her dance performances based on the Butoh style. The program includes a book exhibit and video clips about Kantor.

Joan Laage is one of our docents and she is also an accomplished butoh dancer/director - many Garden visitors know her work from various performances on different occasions, from Moon-viewing celebrations to annual Wandering and Wondering presentations .  Come to Polish Cultural Center to see how she and her dance group Daipan butoh translated the famous Polish theatrical piece of 1970s into 21 century butoh dance.

Press release for the performance is here...
More about Tadeusz cantor and his work at CRICOTEKA - Centre for the Documentation of the Art of Tadeusz Kantor.