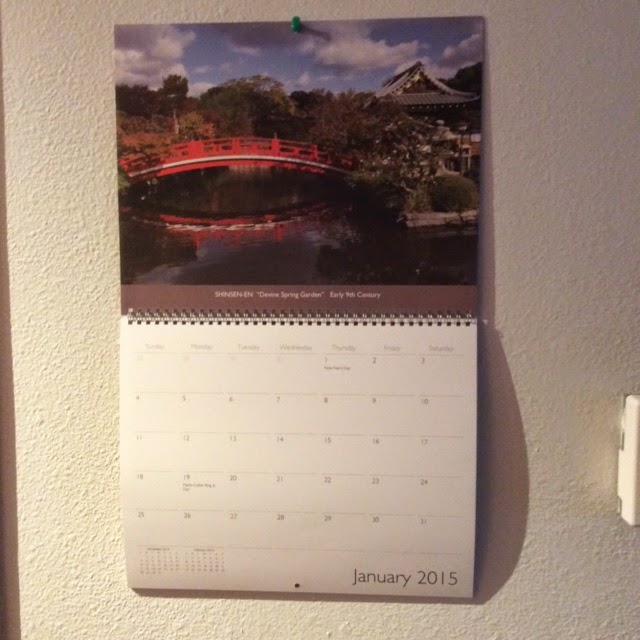 Attention Kyoto lovers!   Dewey put together a 2015 calendar from the field trip to Kyoto some of our guides took in fall of 2014.  The picture of January page is featured above and i shows  SHINSEN-EN temple; the rest of the calendar has other beautiful pictures of Kyoto gardens and temples.   All of the pictures were featured in Dewey's posts summarizing the trip on 12/16, 12/19 & 12/28) (links: part 1 here, part 2 here,  and part 3 here) and now you can have them in supersize paper version to look over all year round.

The calendar is a nice memento not only for those who went for a Kyoto trip, but also a learning tool/material for those who didn't:  together with Dewey's posts on the subject you will have a nice, brief and informative Kyoto compendium,  should you ever consider going there or just study it from afar.

The calendars are now fully designed and ready for print, but turnaround time between when Dewey can order and receive the calendars is about 10 day, so order yours ASAP from Dewey's webpage - once on Dewey's webpage  you can view all the the 13 photos which make up the calendar cover plus months - under the tab KYOTO GARDENS 2014 - CALENDAR: "2015 Kyoto Gardens":
http://www.deweywebster.net

+ Also on Dewy's webpage (under the tab KYOTO GARDENS 2014, sub-tab "GARDENS 101") you can view his entire photo-essay from our guides Kyoto field trip in one-page post.

Invitation to a probably a most memorable travel to Japan

You are invited to join in a select group of people to participate in assisting building a memorial Japanese Garden to commemorate victims of tsunami/earthquake of March 11, 2011 in Tohoku, Japan and recovery from it. Garden building project is organized by Japanese Garden Association as a 5 year program. You will receive training from traditional Japanese gardeners who supervise building and will befriend with young Japanese gardeners from all around Japan as well.

After garden building, we will visit gardens and temples of World Heritage, designation,  coastal cities undergoing recovery and coastline area which is designated as a new National Park. Travel will start from Seattle on October 8 through 22 ending in Tokyo.  Optional travel goes to Kyoto/Osaka.

There are many of you who have benefited overtime being associated with Japan or apprenticed and studied in Japan, yet some of you including myself, who do not know how to assist Tohoku, Japan for their recovery from disasters of March 11, 9011, in some meaningful and constructive way.

There is a unique opportunity to assist in building a Japanese Garden near Sendai, Miyagi Prefecture. This garden, when completed, will be a memorial and prayer for victims of disaster and commemorate their efforts in recovery and future development.

Designing and building of this garden is organized by Sendai Chapter of the Japanese Garden Society. It is being built on a five year program with a completion date set at 2019 to coincide with the society's 100 year anniversary.

This is an excellent opportunity for those thinking and pondering how best to participate in recovery in Tohoku but mutually beneficial. You could attempt to do that in signing up  for a work study and volunteer program being developed by Koichi Kobayashi with an assistance from Japanese Garden Society and NAJGA.

With this program, participants will engage in assisting building a commemorative Japanese garden under Japanese expert's supervision, visiting and learning conditions and people of cities devastated.

This is the base program for thirteen days. There could be an optional tour to Kyoto, for five days. Program start will start on October 8, 2015 in Sendai with October 8 departure from Seattle. Cost will be around $4,800.

If you are interested in joining, please send me your name, address, email, work place, profession etc. to Koichi Kobayashi.

For preliminary itinerary, see next page.