Other Gardens: Dallying with the Dahlias 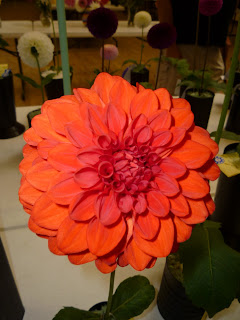 Here is the first post from the guest-blogger, our fellow guide, Monzie.  Can you guess who Monzie is? I put a pic of Monzie in the right-side bar. aleks

My dahlias are doing poorly this year (not a bloom yet); so last weekend I popped over to the Seattle Dahlia Society's annual dahlia show in Lake City for some inspiration.

After a "hi" to the society's greeter behind the welcome table, who had a show-stealing puppy on her lap, I joined 12 others browsing among one zillion gorgeous scarlet, orange, yellow and white blooms on five long tables, helpfully arranged by type of dahlia - you know, formal and informal, decorative, cactus and semi-cactus, ball and so on - many with award ribbons alongside. Spectacular blooms for a p patch; too much for a Japanese garden. 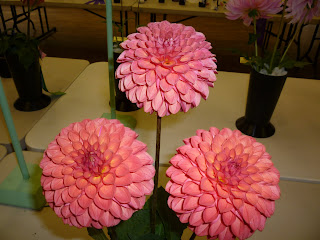 Passing by the really, really big ones - a bright lemon yellow flower as big as a dinner plate - I headed for the ball and mini. Setting out to be uncharacteristically organized about this thing, I picked out the eight dahlias that appealed to me most, wrote down their names, then retraced my steps to take a picture of each in the same order. Enjoy a few above!

Now I'm set to buy tubers for next year. But, still, how to avoid producing more reluctant dahlias? The answer was at hand! In addition to a very well done display on how to grow them, there was a $2 pamphlet with large print and close-up photos with arrows clearly pointing to "eyes", "neck", "center bud" and "side bud", etc, which described eight steps. My big take away was Step 1: Plant tubers in potting soil until they sprout then transplant. Aha! That's giving them a head start. Goal: Early blooms in 2011!
Posted by Monzie at 3:15 PM