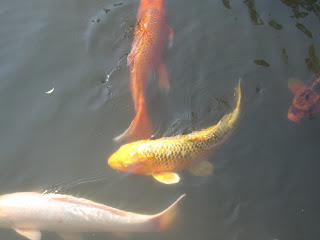 Yesterday I led a delightful group on a tour of the Garden.  The weather was warm, but the cool shade throughout the paths was a welcomed respite from the intense noon-day sun.  When I arrived, there was a great blue heron, pretending to be a statue, on a rock in the inland sea.  When I went back to get my camera, he was gone.

A visitor at the garden wanted to know how the three koi that were donated yesterday were doing.  Since I knew nothing about the donation, I could only speculate.

When my group stoped at the moon viewing platform, the majority of the koi were being fed from the zig zag bridge.  It took a while for them to realize there was more food awaiting in a different location, and the koi parade began! 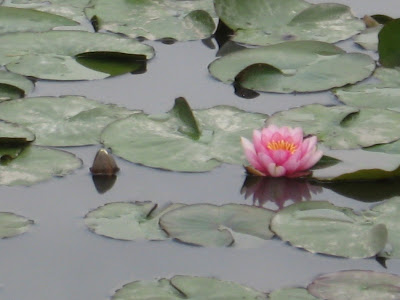 They were so colorful, and there were so many.  Before all the larger koi arrived, I noticed many small koi zipping out from under the lily pads.  It was interesting because I had never seen so many at one time.  Unfortunately, their tiny mouths, unlike the more mature koi, were too small to grab the fish food.

Yesterday, the 520 bridge was closed for repair.  I rarely notice a complete lack of road noise, but I was intrigued that several times during my tour, I heard quiet - no cars driving by.  This gives me great hope for the change that may be realized when the Arboretum on-ramp is closed.

Dr. Eugene Webb, Emeritus Professor, The Henry M. Jackson School of International Studies, University of Washington, presented Unit 86 guides with the topic, How Buddhism Became Japanese, on Saturday, August 20, in the TCR.  Via slides and lecture, Dr. Webb's presentation gave a fascinating overview of the beginning and growth of Buddhism from India, through China and Korea, to Japan.

Dr. Webb's discussion included topics of how elements of other religions and beliefs influenced and combined with Buddhism, the rise of Zen and Exoteric buddhist practices, and the creation of the Tendai School in Japan.

His presentation have us all a better framework for understanding why the Seattle Japanese Garden is a Chaniwa Garden (Tea Garden), and appreciation for the historical design influences of the Garden's Pagoda.  We all learned a great deal from this scholarly presentation.

Many thanks to Dr. Webb, and our Education Committee!
__________________
P.S. from aleks - here are some active links regarding info on 'chaniwa gardens', in response to Keiko's comment below:
• Japanese Gardens: the Chaniwa - on asiawelcome.com
• Chaniwa gardens at wikipedia: Japanese gardens- wiki
• Gardens in Japan: A to Z Photo Dictionary
Thanks Maggie, Keiko and dr. Webb, for all the teaching - much appreciated. aleks
Posted by Maggie C at 11:07 AM 6 comments:

a world-healing night of the 15th... moon gazing


1809
.世直しの大十五夜の月見かな
yo naoshi no ôjûgoya no tsukimi kana
a world-healing
night of the 15th...
moon gazing
In the old calendar, there were two harvest moons: the 15th day of Eighth Month (this is the more important meigetsu) and the 13th day of Ninth Month.  "World-healing" (yo naoshi) could refer to the Pure Land Buddhist notion that we live in a corrupt and depraved age. The harvest moon seems to repair the world.
Haiku by Kobayashi Issa, translated by David Lanoue
by aleks
Moon-viewing last Saturday was as joyful and delightful as ever in Seattle Japanese Garden: song and dance, tea ceremony and haiku contest, lanterns and floating boats.  The Seattle Astronomical Society had their telescopes busy, busy - when he appeareth. The moon that is. In exquisite condition, slowly rising over the huge pine trees.
Not that it is essential for the moon to be present at the moon-viewing ceremony  - waiting and anticipation is part of the moon gazing tradition, but we did have a beautiful sunny evening and no rain at night while viewing the moon, so many people were able to enjoy the event. Even mosquitos came to celebrate - hope they made it out alive:))...
I heard that the haiku contest had a record number of entries this year,  but I didn't learn how the winners are chosen - do Michael and Tanya over at Haiku Northwest table have time to read them all?! Or do they throw the haiku into the hat? Oh, well, perhaps I'll find out next year...

Moon-viewing is one of my favorite celebrations in SJG, and I've been coming for several years; but only this year my volunteer shift covered the entire 4 hrs of the ceremony, so I had a chance to see it in progress,  hear the comments people made and make some observations + a few notes to myself. Generally guests were in very festive moods, children overjoyed and adults very appreciative, so 'oh' and 'ahs'  were the most frequent expressions.

And here are my-notes-to-self:
1.) Prepare some leaflets on butoh for the next year - I was stopped many times with similar question, once even in Japanese (! - had to direct to Hiroko): 'what is it, and how is that Japanese?'. Thomas correctly noted 'the dissonance that is designed into the movement and presence of the performers', but hey, if people want to cure that dissonance why not help them out?  Especially on the night of healing...
2.)  The luminaries and lanterns were scheduled to be lit at 9 pm, but many people inquired, (some down right complained) why not earlier... Had a few people tell me that it is more proper/Japanese to lit them at dusk, and not while it's pitch dark...  Considering that  lightning the lanterns became a bit difficult after the night fell (I couldn't see what I was doing) the timing could be earlier, indeed.
3.) Noticed that we had 2 natural and distinctive audiences: one from 6-8:30 (lots of people left just before 9 pm)  and one 8:30- 10.... The former included many young, dressed up for occasion children and elderly, the latter was more sporty crowd  (fit for the night, flashlights and all).  So perhaps we could address this natural break in  festivities by creating two parts the next moon-viewing time?  Maybe with children performing for the earlier part so kids can relate,  and adult part with butoh and telescopes?
4.) If we move down the time for the lights to be lit, it would also please the earlier crowd before they exit - they didn't get to see the Garden lit by the luminaries and lanterns:(...
Well,  my 2 cents...
- a self-appointed committee of 1, but please note that the book 'My correct views on everything' was originally published in my native language, so it could be a national trait.
_____
REMINDER for all docents:   CONTINUING EDUCATION MEETING  THIS SATURDAY, AUGUST 20, 10:30 TO NOON -  Dr.  Gene Webb will speak  on How Buddhism Became Japanese and touch on the stone structure that peeps through the leaves on top of our  garden's mountain.  See you Saturday!
And while on the topic of continuing education - Scott Williams was photographing the moon-viewing ceremony for the Seattle Parks Dept. - he kindly offered to come and speak to us, docents, about tips on photographing the Garden - his website is here.  One thing he said that sat right with me,  was that the equipment is less important that knowing what you are looking at -  it sounded right: my camera and I had a rough night out there... Very sorry for my lousy pics and please send your own   - I will gladly post them!
____
I just looked at news from Fukishima.... Oh! Be strong, people and world out there... Our hearts are with you.

Dr. Gene Webb will speak on How Buddhism Became Japanese and touch on the stone structure that peeps through the leaves at the top of our garden's mountain.  See you Saturday!

Michele, Mary Ann and Joan
Posted by Monzie at 5:36 PM No comments: 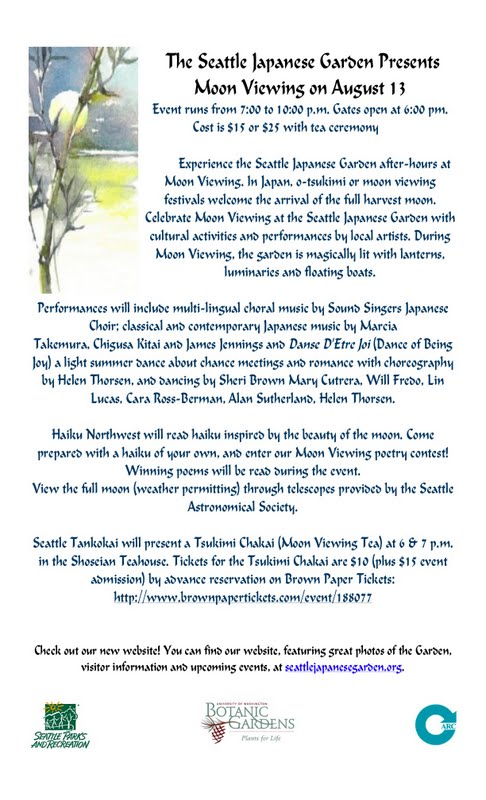 Couldn't make it to the garden July 9 for Tanabata?

That's when we celebrated the 2,000-year-old Tanabata festival.  Here are pictures that capture some highlights.

For those not up on Japanese myths, Tanabata, or the Star Festival - observes the one night in the year when a stern king allowed two lovers to see each other after he had banished them to opposite sides of the Milky Way for neglecting their responsibilities.  Wishes and prayers are offered that the night sky will be clear so they can see each other.


Picture 3:  Students at the Minakami Karate  demonstrate their art for the first time at the garden:


Picture 4:   A small visitor checks to see if her  koi  kite still flies.  She had carefully colored her treasure at the display by the Drachen Foundation for kite education:

There is one more pic, with no description:

Ok, I posted Monzie's write-up and pics from the time I wasn't around - prolly many mistakes - so sorry; will post any needed corrections  tomorrow.